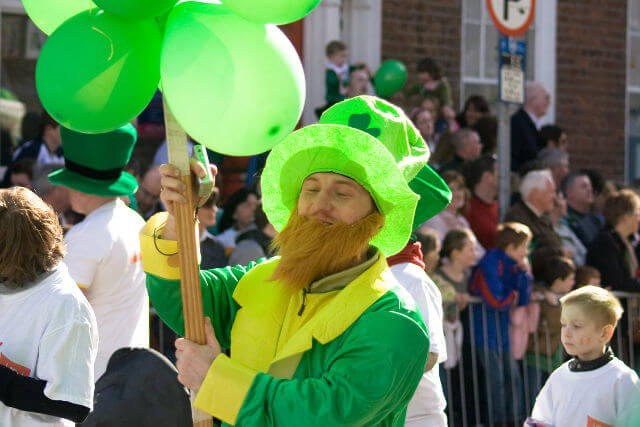 St. Patrick’s Day was a bewildering holiday for me when I was a child.

I learned pretty quickly that I was supposed to wear green on March 17 (and that, if I forgot, I was subject to being pinched by anyone who noticed).

It took a little longer, but I also eventually learned not to wear orange on that day, lest I get punched on the arm. Even the tiniest peep of orange in the embroidery of a shirt was fair game!

In fact, it seemed like everything turned green on St. Patrick’s Day! McDonald’s offered mint-flavored “Shamrock Shakes” (I liked those!). The bakery offered green-tinted bread (I didn’t like that…it looked moldy!)

And, of course, someone always managed to tint all the fountains around town a particularly hideous shade of green, to the point where they looked like they were full of antifreeze!

The thing is, I had no idea why these things happened, and neither did my school friends. We were just a bunch of American kids growing up in the inland northwest. Most of us had only nominal Irish ancestry, and we couldn’t have told a Fenian from a field mouse.

All we knew was that, on St. Patrick’s Day, you wore green (but never orange!), ate green foods, drew pictures of shamrocks (or more usually, because we didn’t know the difference, four-leafed clovers), and celebrated being Irish (whether you were or not!).

Who was St. Patrick?

Saint Patrick (Naomh Pádraig) is one of the three patron saints of Ireland (the other two are St. Brighid (Naomh Bríd) and St. Columba (Naomh Colm Cille). He’s often referred to as “The Apostle of Ireland.” He was born sometime in the fifth century AD.

He was not the first Christian in Ireland by any means. Brehon law, which still governed Ireland at the time, allowed slaves to worship in whatever manner they pleased, and a great many of those slaves were Christians (including Patrick himself…more on this in a bit).

What Patrick did was focus his evangelism on the upper classes of Gaelic society: Chieftains, cattle lords, kings and druids, and their families.

He’s rather famously remembered for using three-leaved clover (seamhair óg, “young clover,” from whence we get the word “shamrock”) to illustrate the concept of the Holy Trinity to High King Laoire at Tara (though, given that the shamrock was already used in Irish paganism to symbolize their triple goddess, it’s likely that Laoire wasn’t altogether unfamiliar with the concept).

NOT FROM AROUND HERE

It comes as a surprise to some that, although he spent most of his life in Ireland, St. Patrick himself was not Irish.

He was a Roman citizen from Great Britain, the son of a deacon and grandson of a bishop, who was kidnapped from his hometown of Banna Venta Berniae (the location of which is disputed) by Irish raiders at the age of 16. He spent seven years as a slave in Ireland before escaping and returning to Great Britain.

He traveled to Rome, and was eventually ordained to the priesthood. According to his own writings, he had a vision that prompted him to return to Ireland:

“I saw a man coming, as it were from Ireland. His name was Victoricus, and he carried many letters, and he gave me one of them. I read the heading: “The Voice of the Irish”. As I began the letter, I imagined in that moment that I heard the voice of those very people who were near the wood of Foclut, which is beside the western sea—and they cried out, as with one voice: “We appeal to you, holy servant boy, to come and walk among us.”

Patrick died on March 17, most likely sometime around 460 AD, and is said to be buried at Down Cathedral in Downpatrick (Dún Phádraig) in County Down. He is claimed as a saint by both the Catholic Church and the Church of Ireland (Anglican).

(Oh, and by the way…his official ecclesiastical color is blue, not green!)

Regardless of where he was born, there’s little doubt that Ireland eventually completely embraced St. Patrick, and he is deeply entwined with Irish identity.

March 17, the date of his death, is his official ecclesiastical feast day, and until fairly recently, has been observed primarily as a religious festival in Ireland.

As a national patronal feast day that inevitably falls during the penitential season of Lent, St. Patrick’s Day could be a somber occasion, if it weren’t for the fact that the Catholic church actually lifts Lenten restrictions for the day, so even the most devout can celebrate.

It’s not surprising that Irish emigrants would have seen his feast day as a time to remember and celebrate their Irish heritage.

In the New World, religious processions became parades, and taverns, where people could meet, reminisce, and drown their homesick sorrows, replaced the church as a place of celebration.

America being America, it’s also not surprising that others would eventually come to join the celebration. As the saying goes, we’re all Irish on St. Patrick’s Day (and Mexican on Cinco de Mayo, and Italian on Columbus Day, and German during Oktoberfest…heck, we just like to party!)

How did some American St. Patrick’s Day traditions get started?

As I said above, St. Patrick’s official color is blue…so why do we wear green on St. Patrick’s Day? The simple answer is that St. Patrick’s Day has become more a celebration of Irishness than a religious observation…and the color most closely associated with Ireland– The Emerald Isle — is green.

This is a uniquely Irish-American tradition, originating in the 1700s.  It was thought that wearing green made one invisible to leprechauns (who will pinch you if they can see you!). The pinch was a reminder to get your green on if you didn’t want to be pinched all day by the nasty little beasties (or by your peers!).

This appears to have been a more isolated tradition (also American, but more regionally defined) and one that has, thankfully, gone out of fashion.

It’s rather ironic that most of the kids I knew growing up knew nothing of The Troubles, were not of obvious Irish heritage, and were themselves mostly Protestant! Just goes to show what happens when children imitate their elders without understanding the whys or wherefores.

As I mentioned above, the shamrock (or young, three-leaved clover) is associated with St. Patrick’s evangelism, and as such has become a symbol for Ireland itself.

Be careful, though! Shamrocks have three leaves, not four! And most of what is sold in the U.S. as “authentic Irish shamrock” is actually authentic native American wood sorrel…not clover at all!

However you celebrate, be sure to have fun on St. Patrick’s Day! Whether you’re Irish or not, Catholic or not, Christian or otherwise, it’s an opportunity to celebrate a culture that’s had a tremendous impact on the world (neat trick for a small island!).

PrevPreviousAudio: How to Cuss Like a Leprechaun
Next2013 Gaeltacht Summer Awards AnnouncedNext