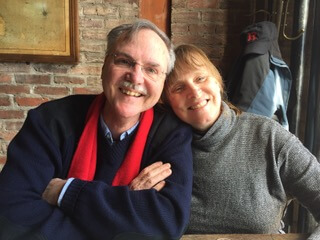 James is a recent retiree, and as a Bitesize Irish member, we asked if he would be generous enough for us to interview him, and indeed he was!

Where abouts in the world do you live?

I live in Manasquan, New Jersey, a small town on the Jersey Shore, about sixty miles south of New York. The house was built in 1904 by a sea captain, one of the many who helped settle the town, a former Indian village.

I grew up a few miles from where I now live, then I ran off and joined the circus: I am a retired US Department of State Foreign Service officer, and have lived and worked all over the world, serving as an American diplomat in our embassies and consulates; I retired about 18 months ago.

My ancestry in part, and the realization that my grandparents were sometimes speaking “Irish with English words,” i.e., phrases and sentence structure that reflected their own parents’ native Irish language influence. Also, I am an accomplished linguist (French, Russian, German, Spanish, and a smattering of others, plus years of Latin) and Irish was a language I could study just for the fun of it, with no practical or professional application.

And it is such an interesting, challenging language! I even got to live out a lifelong “bucket list” dream, having a conversation in a pub in Ireland, in Irish! This was in Connemara, near Clifden, about ten years ago. The local team had just won the league Gaelic football championship, and I happened in just as they had gathered to celebrate it! They knew I was not a native speaker, but they were happy to hear me try to communicate in their own language.

Yes I do; both my paternal grandparents were born there, but met and married in the US. Most of the remaining family has emigrated to the US, but some few still live on the family farm or nearby, just outside Newry. On my mother’s side, you have to go back a bit longer, but they too all came from Ireland.

I have tried self-study, local community college courses, audio tapes, and courses at the American-Irish Historical Society in NYC. All have helped, but now that I am retired, I find the best way to keep up is with the lessons from Bitesize.

P.S. If you want to learn to speak the Irish language, jump on this wonderful journey with Bitesize Irish.

P.P.S. The quote from James above to fear not reminded us of this wonderful song of similar sentiment by Declan O’Rourke: