In this month’s Bitesize Live Q&A Ben and Eoin welcomed you to submit your beginner learners’ questions about the Irish language. Topics covered included blended approaches to learning, learning from poetry and song, prepositions, initial mutations, the Irish primary school system and preserving the linguistic and cultural richness of the language.

Here’s a taste of the discussion..

John asked for advice on Prepositions – particularly relating to irish terms for the English word ‘in’ (i, in, sa, san, isteach) and when to use which one.

Tom asked what the best approach is to learning eclipsis (urú ) and lenition (séimhiú)?

Ben recommended that Tom expose himself to the Irish language as much as he can – both reading and listening. That way the brain will eventually get acquainted with these changes.

There are a lot of different instances in which séimhiú and urú can occur, and a lot of rules involved in remembering them all, so it may be useful to focus on them one rule at a time. For instance, if today you were to study the way that that the possessive adjectives cause séimhiú and urú – my, your, his, her etc. – you could then spend the next week or two on the look-out for examples of this rule – whether that be when listening to the radio, talking to people or when reading a book or online content such as a journal or social media. That way you are focusing on one distinct aspect of eclipsis and lenition, and when you are comfortable with that aspect you can consider learning the next set of rules using the same approach.

James said that one thing that gives him trouble is finding the right irish word to use in that place of the english word ‘to’ (i.e. when to use ‘go’, ‘go dtí’ and ‘chuig’).

We use ‘go’ and ‘go dtí’ when talking about going to a place’, i.e. “ag dul go dtí An Spáinn” or “ag dul go Corcaigh’. You will notice that ‘go dtí ‘ is used when the article appears before the noun, whereas simply ‘go’ is used when the article does not feature. Another option rather than ‘go dtí’ is to use ‘chun’. Do bear in mind, though, that after ‘chun’ the noun changes to its genitive form, e.g. “ag dul chun na Spáinne” (going to Spain)or “ag dul chun páirce” (taking the field).

Michele lives in an Irish speaking region and her Husband speaks Irish the language. She tried going to conversational classes but did not find them helpful. she asks if she could memorise verb conjugation first and then add rest.

Ben explains that different approaches to learning work better for different people than others, and suggests that Michele might benefit most from a blended approach that includes both learning verbs from a grammar book and interacting with people in everyday life through Irish, given that she lives in An Ghaeltacht. Ben suggests that Michele might like to join a club or society, or doing some voluntary work in the area, in order to benefit from regular exposure to the language in an everyday context.

Here are some of the resources that were recommended in this Q&A:

Poetry for the Junior Cycle on Tuairisc.ie

P.S. What did you learn from this Q&A? Leave a comment below!

Emark on your Irish language journey!

We want to help you achieve Gaeilge Gach Lá – Irish Every Day. Since 2010, we’ve been helping thousands of people learn, practice and speak the Irish language. Take your Irish language journey at your own pace, and practice with others and our fluent staff. Aistear (“journey”) is our self-paced language learning platform.

Or become a member now to access our self-paced courses and more:
Membership Plans

Don't miss our on our next Live Q&A

The fluent staff at Bitesize Irish are passionate in helping your to learn, practice and speak Gaeilge. Watch more previous live Q&As. 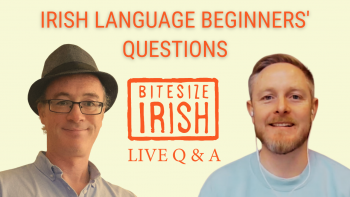 In this month’s Bitesize Live Q&A Ben and Eoin welcomed you to submit your beginner learners’ questions about the Irish language. Topics covered included blended approaches to learning, learning from poetry and song, prepositions, initial mutations, the Irish primary school system and preserving the linguistic and cultural richness of the language. Here’s a taste of

In this month’s Bitesize Live Q&A Ben and Niall answered your questions about how the beginnings of words change (or “mutate”) in Irish depending on context. They also shared some handy tips for learning grammar and pronunciation in Irish! The questions that Bitesize subscribers asked Ben and Niall this month raised some very interesting topics. 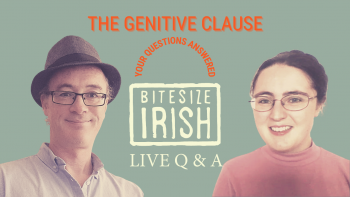 On this November’s live Q&A, Ben and Siobhán from Bitesize Irish answered your questions on the Genitive Clause (‘An Tuiseal Ginideach’). Watch back to hear them demystify this intricate feature of Irish language grammar. Here are links to resources that were mentioned during the livestream: Conceptualising the Genitive So, as you may be aware, the 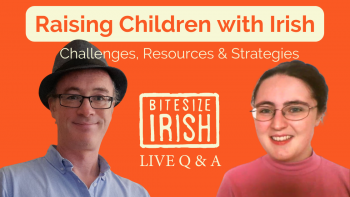 On this October’s live Q&A Ben and Siobhán from Bitesize Irish answered your questions on raising children with the Irish language. They discussed the challenges that parents can face when trying to introduce more Irish language into daily family life. Watch back to find helpful resources and strategies to help you to achieve your goals, 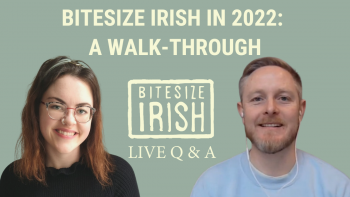 Bitesize Irish in 2022: A Walk-Through

Watch the recording of Ben, Emma and Eoin of Bitesize Irish walk you through Bitesize Irish in 2022. If you’re looking to embark on your Irish language journey with us, you’re surely curious of what’s inside. Watch our walkthrough and an explanation of our membership plans. 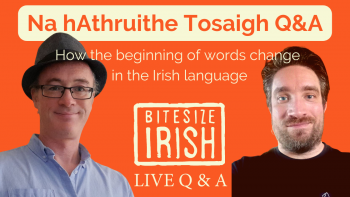 How words change in the Irish language – Q&A

In this live Q&A with Ben and Niall of Bitesize Irish, we answer your questions! The topic this month is how the beginnings of words change (or “mutate”) in Irish, depending on context. Unfortunately during this session, we had audio difficulties and so we don’t have a recording of the Q&A session. However, we’ll add